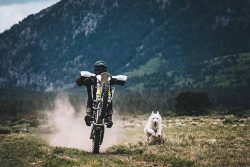 Riding a dirt bike is a great way to spend an afternoon when the weather’s nice and the trails are clear. It can also put you at a financial risk if you crash and the vehicle isn’t properly insured.

“A lot of people don’t think their dirt bikes need special coverage, but they do,” said Yolanda Hernandez, an insurance agent with Mennonite Insurance Services.

Not only is damage to the bike itself not covered, but damage to others caused by the bike is also not covered. Unfortunately, many people don’t realize this until their claim is denied and they’re left paying out of pocket for any damage caused by a wreck.

Several insurance companies offer policies that cover dirt bikes and other off-road vehicles like an ATV or a quad. Hernandez recommends buying one of these policies for your vehicles as well as any powerboats or jet skis you own so you aren’t left footing the bill in case something goes wrong.

Call Mennonite Insurance today at 559-638-2327 or e-mail if you need help finding the right insurance policy for your ATV, dirt bike, jet ski, motorboat or quad.